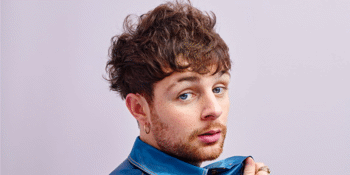 Tom Grennan, the UK’s breakout star of the year, is heading to Australia in September 2022 and he’s all set to share a “Little Bit of Love” with fans in Brisbane, Melbourne and Sydney.

Currently in the midst of a completely sold out UK tour including London’s 10,000 capacity Alexandra Palace, 2021 has been a huge year for the London based singer-songwriter.

Grennan’s critically acclaimed #1 UK albumEvering Roadhas surpassed 250M streams globally and he’s currently one of the top 200 most streamed artists in the world. He’s achieved 3 UK chart topping singles in 2021 alone, including his international bona-fide hit ‘Little Bit of Love’, ‘By Your Side’ and the Number One Trending Song ‘Let’s Go Home Together’ with Ella Henderson.

He made his US TV debut on theThe Late Late Show with James Corden, swapped stories with the legendary Tom Jones forLADbible,earlier this month starred in Soccer AidforUNICEF, the world’s biggest charity football match, and is set to make his Australian TV debut on theAFL Footy Show’sGrand Final special!

Growing up in Bedford, England, Grennan initially pursued a football career before shifting his focus to his other love, music.

After several years cutting his teeth playing solo acoustic shows in London pubs he signed a deal with Insanity Records. But the next step, a collaboration with Chase & Status‘When It All Goes Wrong’, would be a defining moment, putting him firmly on “ones to watch” lists.

Grennan followed this up with a trio of EPs –Release the Brakes, Something in the WaterandFound What I've Been Looking For- which introduced audiences to his gritty-voiced mix of soulful pop and indie folk.

The stripped-down acoustic single‘City of Stars’appeared in 2019, followed the next year by the more elaborate pop-driven cuts‘This Is the Place’and‘Oh Please’.

Grennan dropped the tracks tracks‘Amen’and ‘Something Better’in 2020 signalling a change of direction for his sophomore release.Evering Road, arrived in early 2021, encompassing the spirit of soul and gospel.