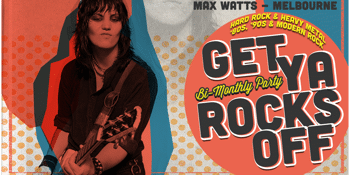 Get ya rocks off

We all want to put the year that was 2020 behind us, and the friendly gorillas of Silverback Touring are planning just that by delivering Melbourne an unashamedly rawkus and loud bi-monthly rock ’n’ roll party. Whether you’re an ‘80s tragic, think the ‘90s were the shit or get down with modern rock, there is something for everyone at Get Your Rocks Off.

The night will feature a nicely balanced mix of live bands and DJ’s with a music policy focussed on hard rock and heavy metal spanning the ’80s, ‘90s and modern day sounds.

On the concept, Silverback’s Danny Bazzi says, “we want to deliver a party destination, every two months, for rock fans to fill the void, give local bands (including original, cover and tribute bands) an opportunity to play and to generally give us all the chance to let loose once in a while. We are stoked to be able to present this bad boy at a true Melbourne institution of rock, Max Watts”.

The first instalment of Get Your Rocks Off kicks off on Saturday 23 January 2021 and will follow bi-monthly.

Unfortunately, Sydney’s Iron Lion is unable to play due to border issues, but Melbourne’s Headhunters will smash out 2 blistering sets of ‘90s rock, and Sydney's DJ Jordan Adam will be spinning rock bangers till late.